I'm dating a resident. And especially for people who are not in medicine, they should CHILL OUT because the resident most likely will never be on time for scheduled events but that is not their fault. That is life as a resident. And life in medicine in general. I think number 1 should be: Take Stock of Yourself - If you are a needy, co-dependant person, you probably shouldn't be dating a doctor.

Ali go right to my point:. What threw me off was that he texted quite a lot at first, but not this week. I highly suggest you stop fixating on him and continue to live your life the same way you did before you met him and date other men instead of driving yourself crazy. What I mean by make allowances is to understand he does not have a regular job…his time is not free since he gives much of his life to his patients. And women who marry doctors have to make allowances for the fact their spouse may not be with them for parties, holidays, etc.

Much of their time is spent alone and they do a lot of the child rearing. This is not for everyone, for sure. If you get with an engineer they mostly have a day job…if you get with a doctor they have crazy hours and are on call.

A woman has to know this upfront and deal. Now, if he has gone radio silent that would not be acceptable either…he could text or call you more often. Your just living your life, meeting and dating men without any goal or objective until enough time has passed getting to know him well enough to even consider him as a good candidate.

All my long-term relationships were when I had zero romantic feelings for them but over-time several months they grew on me and decided to give him a shot became a couple.

But I think I would have gotten one text by now?

What to expect when dating a resident?

Is this radio silence? Just short-term dating but I still want to have fun. Doctors marry doctors or nurses because they get each other. He may have just had a quiet week when he was able to talk a lot or think about dating.

Does that apply here too? Sure, quiet for a few days, for a really busy person is not that big of a deal. Hi, I have a really good friend, not a boyfriend, but we are important one another. On top of this, right now he has a lot of personal stuff to deal with — finding a new flat, seeing his grown up children weekends, dealing with his divorce and selling his business.

But he finds time for me, and I know he does for other friends, because he cares enough to do so. He lives a long way from me, but we meet about once a month.

So what I am saying is that I think if a friend can find the time, a boyfriend certainly should not let a week go by with no contact, however busy he is! Before posting here I was thinking a week max too. Honestly I think I can consider it about a week by now right? Is there a way to find out? Kind of just want to ask him…. He kind of seemed to want an actual relationship though, not positive though.

But this whole is what led me here. Dating is pretty daunting. Dating someone in a surgical residency program or really, ANY residency is something of a myth. Surgeon and I met during his 2nd year of residency. I seriously had no idea what I was getting into back then. After my first formal date with Surgeon, it got not-so-formal. More dinner dates happened at the hospital than anywhere else. 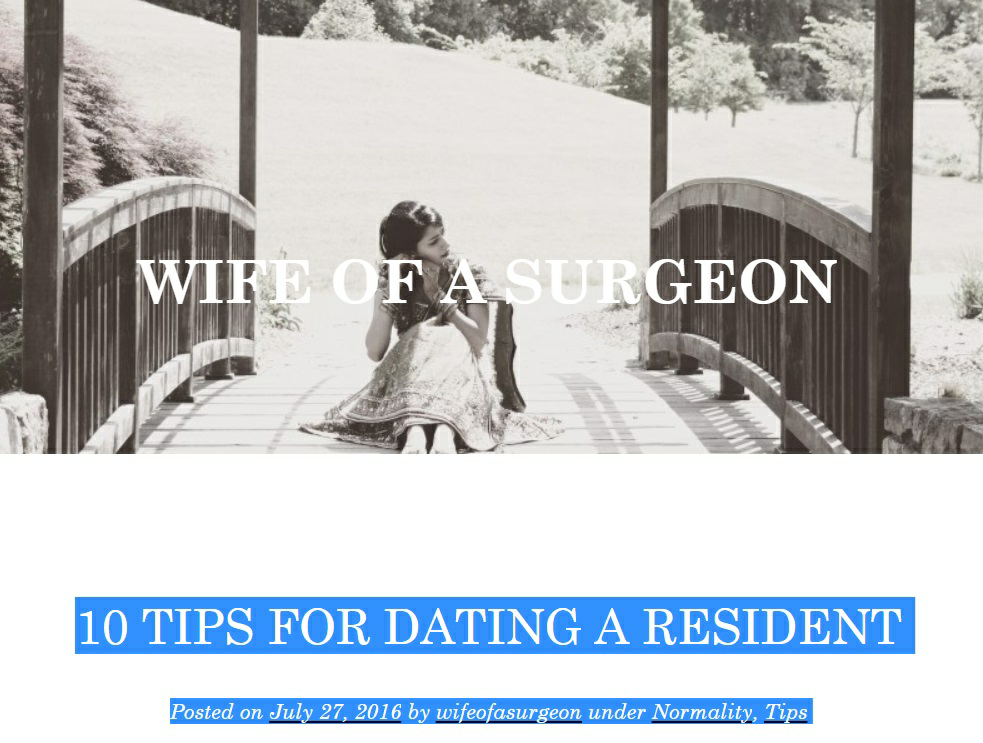 In the end, your where-to-have-a-date question should be: And then, DO IT, no matter how weird it seems. I mean, yes, it is. By the first month, I knew a dinner date meant me cooking, packing and cleaning up afterwards only to spend 30 minutes eating with Surgeon.

I was willing to give it that time. Do I still get stories and reports about the OR?

Be flexible, but also let your super awesome doctor know when you want something! I was always hesitant in bringing up issues, or suggesting things that I knew would be difficult for Surgeon to do. They want to be with you. I certainly was when I found myself on a hike with my favorite person on a post-call day…. Some of my best allies in getting Surgeon to be somewhere on time were his co-residents.

Pay them back in homemade cookies. They are your best friends forever. There have been many disappointing moments in our almost 4 years together directly tied to Surgeon being caught up in some dilemma at the hospital.

No-shows with delayed responses as to WHY the no-show. Once, he had to leave me mid-ordering a meal during my birthday dinner. They do not want to be performing CPR. 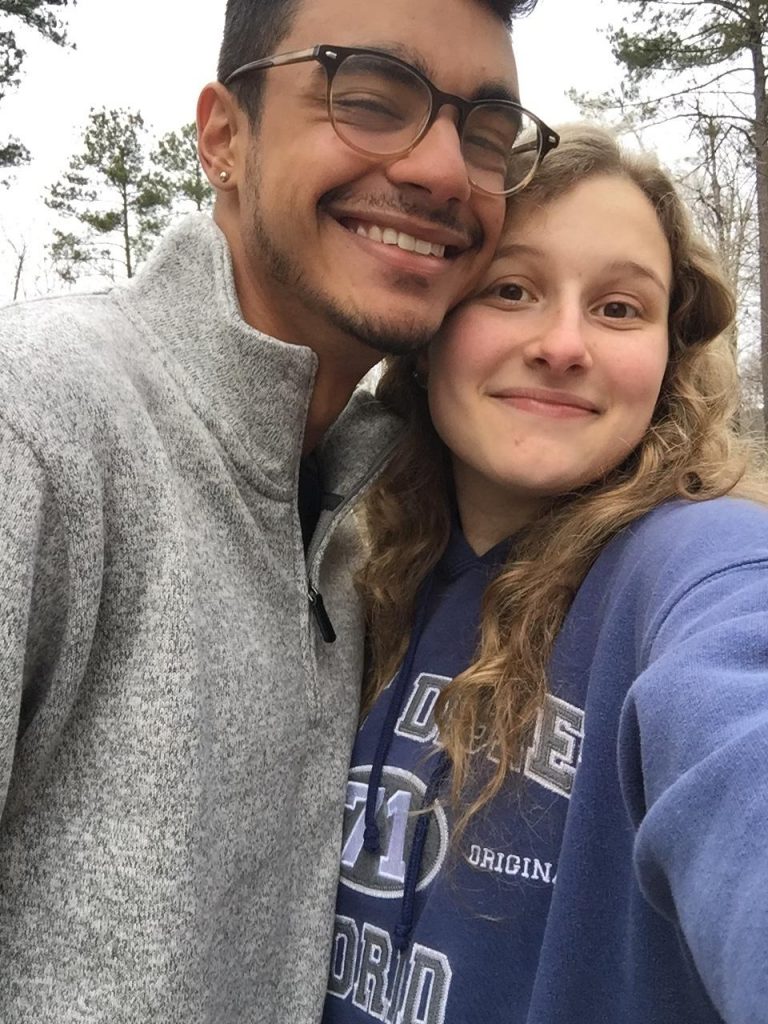 Non-medical things are interesting to residents, especially after a 27 hour shift talking only about medicine. Learn some basic medicine. This is a hard one. I am sure that there are couples out there who don't know many details about the other person's job. People in law or finance or medicine or anything technical. I can't imagine how that works. Without someone having at least a basic understanding of what I do, I don't know where to start the conversation.

If you are dating a resident, try and read some stuff about residency. Blogs might be the easiest place to start. Hey, there are archives here! Books are good too. Intern Blues is the first one that comes to mind. At least then you know what your resident is talking about, a little bit. Ask questions, sure, but starting with some base of knowledge makes things easier.

It's not mandatory, of course. Read relevant articles in the newspaper, perhaps. At least it's a start. Tell your family not to ask for free medical advice, or, even worse, prescriptions. Your resident is not automatically your family's new free doctor. Your resident probably doesn't know enough to actually help, even if he or she wanted to -- and, most likely, he or she doesn't want to.

In an emergency, sure. But that knee pain, or those warts -- tell them to see their actual doctor, and hold the questions. Your resident does not want to perform physical exams at Thanksgiving. Recognize sleep deprivation for what it is, and not a larger sign of relationship trouble. Your resident is cranky? It probably isn't your fault. That's not an excuse, but understand that on the rare day off, maybe 13 hours of sleep is what your resident needs, even more than a delicious brunch that you even made a reservation for.

Your resident is not trying to be difficult, or selfish, or lazy. Your resident is tired, and emotionally drained. Indulge your resident's use of the pause button on the DVR when watching shows with medical elements. It is likely very frustrating for your resident to watch Grey's Anatomy or its television siblings. Your resident will likely stop the show multiple times and try and explain to you why the surgical resident would never be called in to consult on the child with the stomach virus.

Your resident will grow frustrated as he or she sees the doctor touching infected blood with bare hands. Understand the frustration, and let your resident vent for fifteen seconds before continuing the show. Also understand if the last thing your resident wants to watch on a day off are shows about medicine.

Let your resident shower before you approach.